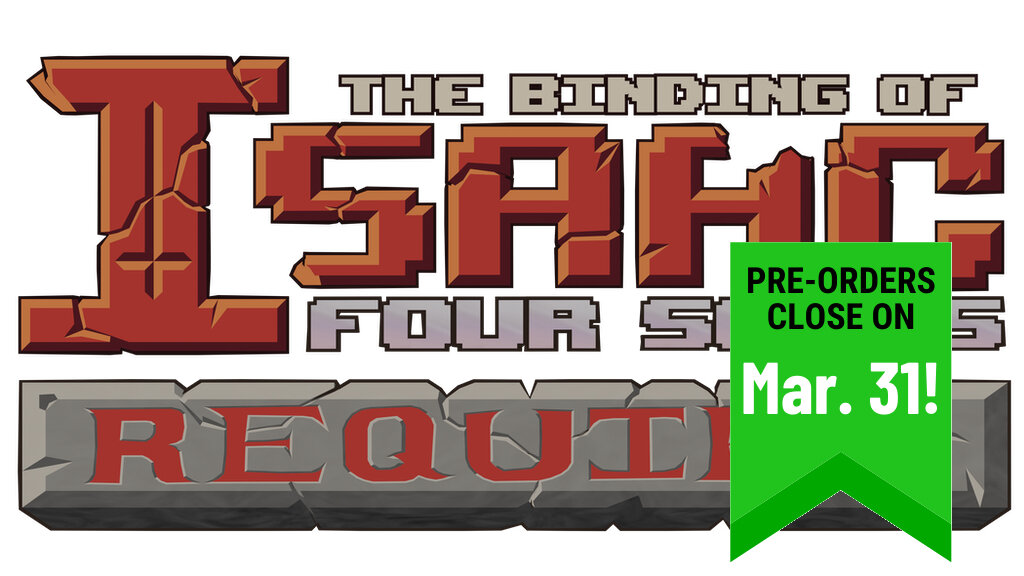 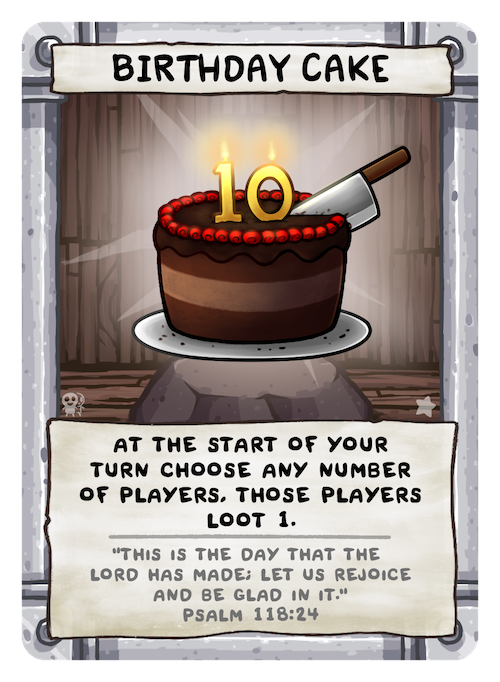 Update: Preorders open again until March 31 or until we sell out again -- whichever comes first! After selling out on our initial preorders, we've since secured another small print run of Four Souls Requiem. Only pre-ordered copies of the game come with an exclusive 10th Anniversary Isaac card. Pre-order the retail version of The Binding of Isaac: Four Souls Requiem and the add-ons from the original Kickstarter campaign. All orders placed now will ship in Fall 2022. Please note that we are still finalizing the design of some of our products and there may be subtle differences between the items shown here and the final products. Credit card charges will appear as: Maestro Media

Latest Updates from Our Project:

We're in the Endgame now! A huge thank you to our very own avengers who have selflessly helped backers throughout the campaign by answering questions and hyping the game on Kickstarter, Twitter, Reddit, Discord, and more! With just 6 hours left in the campaign, we can taste $6.66M. It's so close! You can still help us get there by:

If you can't help financially you can still help by telling everyone about the game. This is the LAST chance to get over 130 exclusive cards. Don't let your friends/enemies/random internet strangers miss out!

Secure your victory against The Beast. We're so close!

Just a quick cheer leading update. You all are amazing and the buzz you’re creating is helping push The Binding of Isaac: Four Souls Requiem to new heights! We're already the Seventh most funded Tabletop game in Kickstarter history and we have a chance to gain a few more spots. Your passion and outpouring of support is truly overwhelming. But no time to rest, we still have The Beast left to destroy! She's looking damaged:

But she still has more hit points to go. There's still the opportunity to add 30+ more cards if we hit that $6.66M Stretch Goal and defeat the Beast. That would take the total of new cards up over 160 cards unlocked during the Kickstarter. That is ENORMOUS, and it all comes down to this amazing community. Great Job!

Remember - The Beast takes damage for every Like/RT Edmund's latest Pinned Tweet and every $1 raised in the Kickstarter.

Anything you can do to help the community, now's the time to do it. 14 More Hours, let's make it EPIC!

If you missed the Livestream last night, catch the replay HERE, we’ve got a ton to tell you!

We’re in the last 33 hours of the campaign and the FINAL BOSS has arrived and you have been taking him down. We need your help defeating him and it is going to take 1,400,000 hits. Every new Kickstarter dollar pledged or like and retweet of this pinned tweet will count for a hit. After 120K hits, Edmund will roll a D20 which will unlock new and special for the backers. The more rolls made, the more rewards he’ll drop!

Henry is also joining the fray just around the corner at $6,000,000! He’ll be randomly inserted into 10% of games. If you bought The Requiem Tier or up, you have a chance to get Henry in your game.

Don’t miss out, it’s the final countdown, your time is running out! Take out THE BEAST and unlock those cards!

You’ve been damaging The Beast with every Like and RT of THIS POST and every dollar raised on the Kickstarter page. Every time she takes 120,000 damage she drops cards that get added to the game! These cards are decided by dice rolls by the creator himself.

Edmund has been streaming his dice rolls. His livestreams will continue for every 120,000 damage done to The Beast, so make sure to keep checking Youtube.

Tell your friends, upgrade your pledge, add bonus support for add-ons or shipping costs. We can defeat The Beast and hit that final Stretch Goal and Social Challenge together! I know there's a ton going on right now so just to recap the final goals we have:

We believe in you! The Kickstarter pledges and upgrades are pouring in and we can see the final Stretch Goal on the horizon. At $6.66M raised on the Kickstarter you will unlock the Final Stretch Goal that adds 5 more Tear Tokens, 5 more Heart Tokens, and 20 more cards added to Requiem. These 20 cards will be voted on by fans post-Kickstarter! Here's what you can do to help the community reach that goal if you are able:

The End is happening on Twitter RIGHT NOW. This will unlock even more Warp Zones! Make sure you head over to Edmund's Twitter to participate in the hype!

As we mentioned above, THE BEAST has arrived. She has 1,400,000 hit points. You can help the community damage her by Liking/RT THIS POST and by adding money to your pledge, or getting others to back. Each like/RT and each $1 raised on the Kickstarter does damage. You're less than 18K away from the next dice roll!

This is it, the final countdown, the last hurrah, the Big Boss Battle. There's just over 24 hours remaining!

Here is the link to the latest Pinned Tweet.

I know we've said it before, but if you're new, here's a few reasons you may want to add funds to your Kickstarter.

It's very simple to upgrade by clicking "Manage your Pledge" or "Manage" from the app. Here you can either Update your Pledge or Edit Reward.

Other Ways to Help

Tweet about it, post on Facebook, Instagram, Discord, Reddit, wherever. Shout it from the rooftops, scream it through the apartment walls, ramble about it on the metro. It is going to be very close to that $6.66M Stretch Goal, and every little bit will help here. We're going to have to work to hit that Stretch Goal, but we can do it if we work hard, just like we did on the Social Challenges!

You've completed The End and have unlocked some AMAZING Warp Zones. The final ones of the campaign, unless Edmund rolls an 18 or 19 on the D20. I could spend hours talking about these titles, but I will try to be brief. You demanded it, we went out and got it, enter Risk of Rain! We love this game on Steam, and we were thrilled when they said yes, I give you Toejam & Earl! This amazing puzzle game kept us going and kept us puzzling for hours, here's Baba is You! He's coming for you in this fantastic FPS, it's Dusk! Their expansion is the 2nd most funded Tabletop Game in Kickstarter history and an amazing game, Kingdom Death! You asked for it, and he's finally entered the game, it's Edmund!

The entire team is eternally grateful to all of you. You have made this an overwhelming, insane, and incredibly positive success! It has been a blast, and this last day is going to be even crazier. We've got this!